“Ancestors” by Maureen B. Cintract @ Cambridge Art Salon from the 2nd of June to the 5th of June

Maureen B. Cintract’s paintings depict her ancestor’s journey from Africa where the earth is rich in the precious metal gold and its people became liquid gold. Some of these people became Jamaicans; they used spirituality as the fire to light their way into the 21st century.

2012 makes the 50th anniversary of the Independence of Jamaica. Maureen will turn  some of her paintings into designs for T-shirts celebrating this historic landmark. 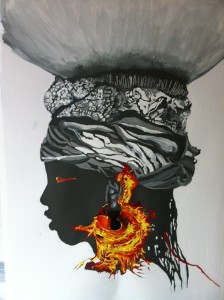 Maureen was born in Jamaica and brought up in the West Midlands. Whilst visiting the USA, she seized the opportunity to study at Kean College of Art as my parents objected to an Art education in Birmingham.  The visits to New York with its amazing architecture led to an Interior Architecture qualification then into a B.A. in Theatre Design at Central St. Martin’s School of Art and Design London. With her qualification’s in hand, Paris was her next stop, where designs of stage sets, film settings, exhibitions and interior as well as costume design projects were the highlights.

An invitation to live in Cambridge came up. So with new adventures on  the sky line, Maureen and her family crossed the  Channel and here she was back home again – to finish what she had  started.