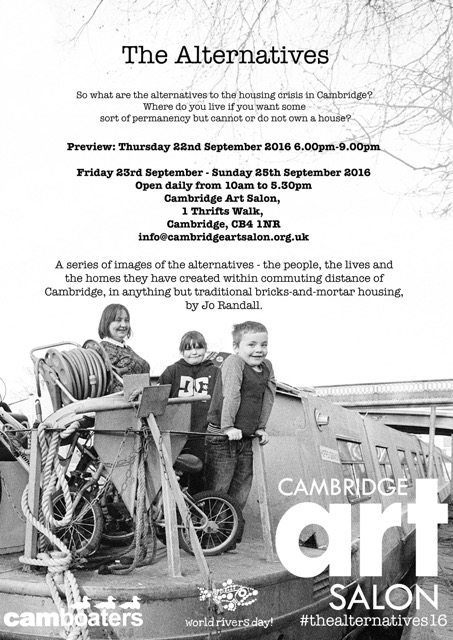 Families live in all different types of home – boats, caravans, houses. Create a picture of your home – or your imaginary home! What would your dream home look like? Imagine living on a boat, or in a caravan, yurt or bender (a home made out of canvas and tree branches) – what might your home look like?

Whether you live in a boat, house or caravan – or dream of it, draw it, create it, paint it! Add some imagination, go wild.

Parents can join in too! All pictures to be shared as part of The Alternatives, Jo Randall, at Cambridge Art Salon – 1 Thrifts Walk, Cambridge CB4 1NR.

What was the inspiration behind the show?
I’ve been a renter in the Cambridge area for the last 12 years. I often get asked ‘have you ever thought of buying your own home?’. If only it were as simple as that! My last module at uni was on the subject of Zeitgeist (which translates to the essence of the times in which we live) and I decided to investigate the housing crisis in Cambridge as I felt it was personal to me and very much a hot topic at the moment.

How did you find your subjects?
My friends have always been very supportive so when looking for subjects, I used social media to ask if any of my friends, or friends of theirs, lived in anything other than a traditional house and if they would be prepared to talk with me, with a view to becoming case studies. I was also introduced to the Cams Boaters facebook group which is run by the inhabitants of the house boats on the Cam. I received a huge amount of interest and support to my request, which was fantastic.

What are your influences as a photographer?
Tom Hunter is a big influence for this project. His series ‘Travellers’ http://www.tomhunter.org/travellers/ documents the lives of the people he encountered whilst travelling in a converted bus from Europe to Portugal in the 1990’s. They’re shot in colour, on a large format camera, and have a really serene feel to them, capturing the humanity and the dignity of his friends. I’m aware that black and white can often be quite gritty and harsh, but I’ve tried to capture the same feeling of contentment and pride in my own images.

The whole show is shot in black and white – was there a rationale behind that?
I have only very recently discovered the beauty of traditional film. Shooting this series in black and white allowed me to further develop my darkroom printing skills. There’s something very tactile about creating your own photographs, from developing the film yourself through to making the prints in wet trays. For me, it completes the artistic process and really feels like they’re my personal creations. Each photograph you create is unique and many of the images in the exhibition were a culmination of many hours of experimentation to achieve my final results.

What have you learned or are hoping to share with the community through this show?
There is rarely a simple answer as to why we choose to live the way we do. There are many contributing factors such as location, finances, environmental impact and lifestyle, and it’s very easy to judge others without trying to understand their choices. The average income in Cambridge is in the region of £28k, with house prices currently at an average of £420k. Home ownerships is no longer an expectation or a right and we need to become more creative, to explore other avenues and find our own solutions to the current housing crisis outside of society’s norms.