EXTENDED FOR A SECOND WEEK

News from The War on Terror 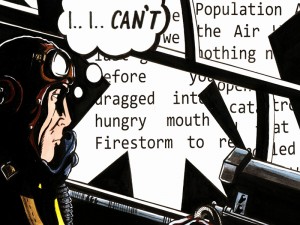 “Images dripping as much with sensitivity as they are with sex and death. Terrifyingly ambiguous, relentlessly appealing, deliriously transgressive, provocative, inspiring – yet tender and engaging. “

My work has appeared in Viz, the Nantais Gallery Cambridge, The Face Sixties Fashion Clothing Store in Carnaby Street and numerous publications highlighting various social and environmental issues (and that isn’t Viz). I was going to have a satirical cartoon in Private Eye once, a cutting piece commenting on one of Tony Blair’s wars, but ufortunately peace broke out the week before publication.

I work mainly with acrylics and ink, but have been known to fiddle around with other stuff.

This is still all a bit of a hobby, but one that hopefully brings a smile to those who come across it. I hope you enjoy the artwork.