The Cambridge Art Salon has SPACES TO RENT at Unit 13, Barnwell Drive, and is delighted to be able to offer them to members of the public in arts or creative making.

Rent starts from £125 per month subject to space size.

All creative practices are welcome, including ceramics, fashion, painting, millinery, and many more.

The Cambridge Art Salon are delighted to open their Christmas Art Fair, with affordable, hand-made works of art and craft, and festive workshops every weekend.

This Sunday, Jill Fordham, stained glass artist, will be hosting a workshop making stained glass angels, for a contribution of less than five pounds per angel – make your own decoration. 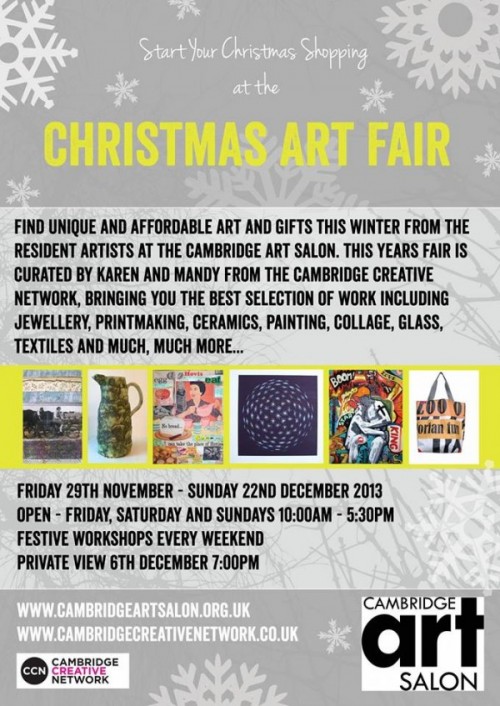 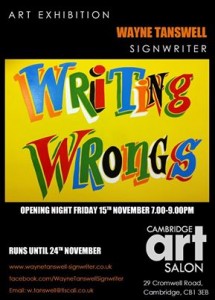 We are delighter to welcome Wayne Tanswell to the Cambridge Art Salon for the first ever gallery exhibition of signwriting works. 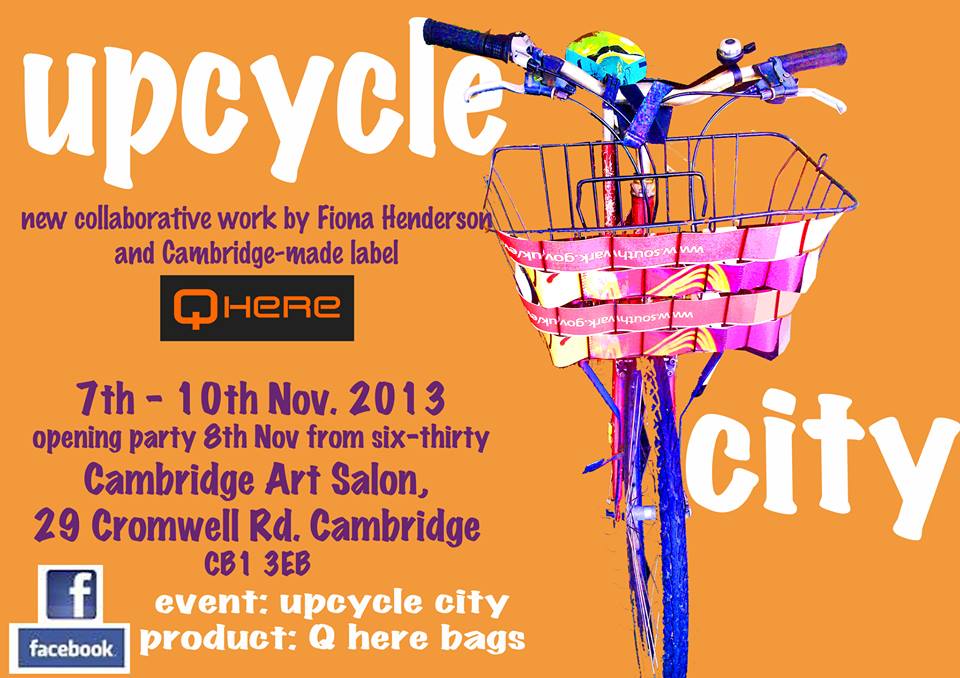 Earlier in 2013, Fiona Henderson and Ruth Schmid were with other artists and designers from the Cambridge Art Salon, chatting over cocktails at 196 on Mill Rd., and what started as fulfilling a rush order of custom made bags, led to them both collaborating further on Ruth’s Q Here label.

Both city residents, cyclists, creatives, and inspired by imaginative waste-users worldwide, Ruth and Fiona’s collaboration has resulted in some new unique, quirky, upcycled pieces that reflect a Cambridge lifestyle.

So now, alongside Ruth’s well known signature bags and accessories, made from used advertising banners and cycle innertubes sourced locally around town, there are some playful new departures.

Come along to the welcoming opening party from 6.30pm Friday 8th, and enjoy delicious treats from Urban Larder ( the café on Mill Rd is also showcasing Q Here upcycled products)

Hope to see you there,  Ruth and Fiona. 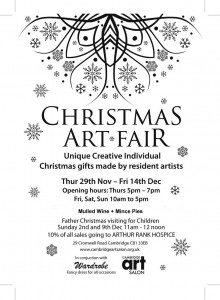 Print out this flyer for a FREE glass of mulled wine and a mince pie!

Creative, unique and individual art gifts created by the Art Salon’s studio residents and artist friends. Stunning photography, gorgeous textiles, Christmas cards, bags, stained glass, jewellery, luscious ceramics and art prints – this is a treasure trove of perfect pressies created by independent artists in Cambridge. Come along and find that perfect gift, have a mince pie or three and a glass of mulled cheer!

10% of all sales goes to Arthur Rank Hospice 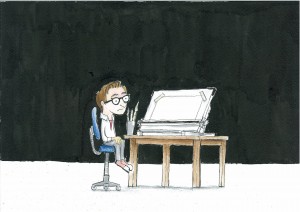 Drawing Blanks – illustrations inspired by the creative person’s dreaded fear of FAILURE. Because, as any real artist knows, producing a bad drawing/painting/sculpture/photograph/pasta collage etc is the worst thing that could ever possibly happen. Ever. Far worse than the supposed ‘real problems’ in the world that pose ‘real’ dangers to us, i.e. death and famine and earthquakes and grizzly bears and so on. This exhibition is the culmination of literally months of the artist’s terminal indecision, intense procrastination and wallowing in self-pity about the fact that no one ‘gets’ him, let alone understands his obvious tortured, fragile genius. Witness these images and feel his pain. Or just drink all the free booze and then leave. Either way.

Rob Wilson is an illustrator and resident at the Cambridge Art Salon studios. 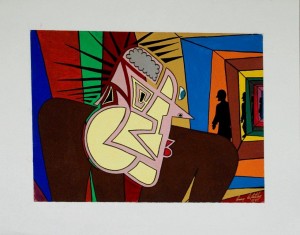 Gary Critchley was born in Birmingham in 1962.  At the age of 17 he went to visit a friend in London for two weeks. Whilst there  he stayed in Campbell Buildings, a well-known squat at the time.  On the tenth day of the visit he was found on the pavement outside the squat, seriously injured, having apparently fallen or been pushed from  the 4th floor.  When the police investigated the incident, they found a man, Edward McNeill, who had been bludgeoned to death with a hammer.  McNeill’s blood was all over the room, yet none of his blood was found on Gary.  Nevertheless and despite a complete lack of forensic evidence, Gary was arrested, convicted  and sent to prison at the age of 18. The judge recommended that he should serve no more than 8 years but, in fact, Gary spent 32 years in custody. He was literally ‘raised in a prison’. Now, at the age of 50 he is serving the rest of his sentence in the community where he can be recalled to prison for a minor offence,  missing an appointment with his probation officer for example. Understandably, Gary has found his new life in the community extremely difficult and has struggled in many ways, particularly financially.

Gary has spent time in most of the toughest English prisons and during those years, became addicted to drugs.  He has now been clean for several years.  After a third suicide attempt in 2006, when he nearly died, an arts educator suggested that he take up painting.  In 2007, a Cambridge librarian, who was looking for some work to hang in the library, bought three of his paintings at the Koestler Trust Awards for Arts by Offenders, and began corresponding with Gary, whose prison address was attached to the paintings.

In the five years since then Gary has painted prolifically and painting has become a hugely important part of his life. Many of his paintings are very dark in feeling, some are humourous, most are full of intense detail. His work has been exhibited in a collaborative show, Parallel of Parallels in Adelaide, Australia, in Left in Vision (Marxism) London, and in We Are Birmingham Shop, Birmingham. This will be Gary’s first solo exhibition. As a reminder, his paintings can be seen at The Cambridge Art Salon, 29 Cromwell Road, Cambridge, CB1 3EB from November 9-14 2012.

You can find more information regarding Gary at http://www.b39969.org.uk 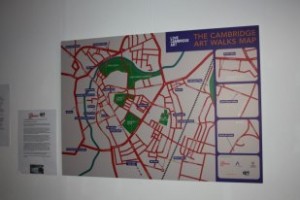 As part of our Love Cambridge Art Campaign, Cambridge Art Salon launched the Cambridge Art Walks Map.  The map acknowledges and celebrates the growing contemporary visual arts community in Cambridge.  We want to highlight and cultivate links between the various arts spaces around Cambridge.  The Cambridge Art Walks Map not only locates art spaces in the city but also facilitates in encouraging people to visit these spaces and open up discussion by bring like-minded people together.  The art map ultimately re-engages people with their community and promotes art that is relevant to their everyday lives.  We have distributed the map freely to local art spaces, education centres, cafes, pubs, restaurants and shops.  Pick up or download your copy above to create your own route! 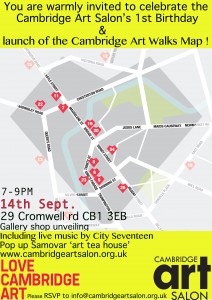 You are, as the image says, warmly invited to celebrate our first birthday with us, at the Cambridge Art Salon. This year has been a busy one, but now we are seeing the launch of the Cambridge Art Map as well as an increased interest in our work and possible expansions left, right, centre, up and down. It’s new, it’s slightly scary, and it’s happening just off Mill Road. 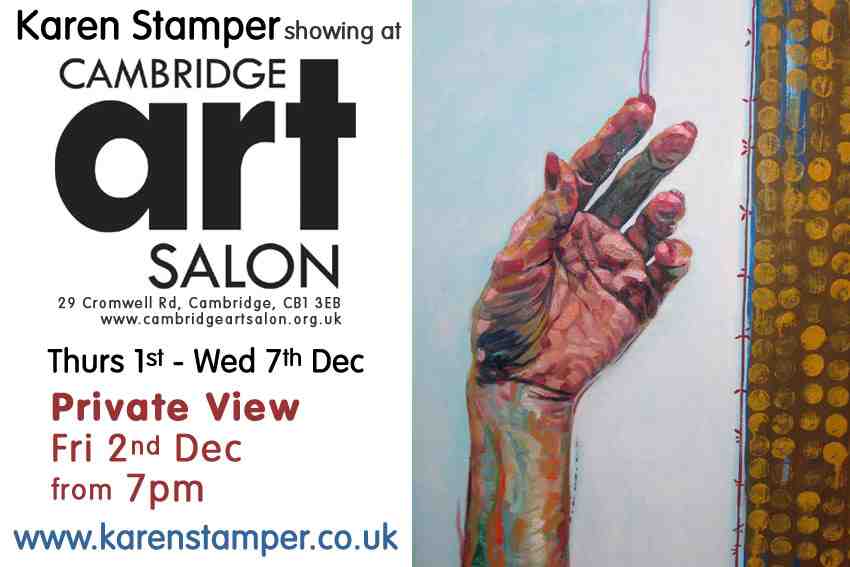 The Cambridge Art Salon is delighted to host Karen Stamper and her beautiful, intense paintings. 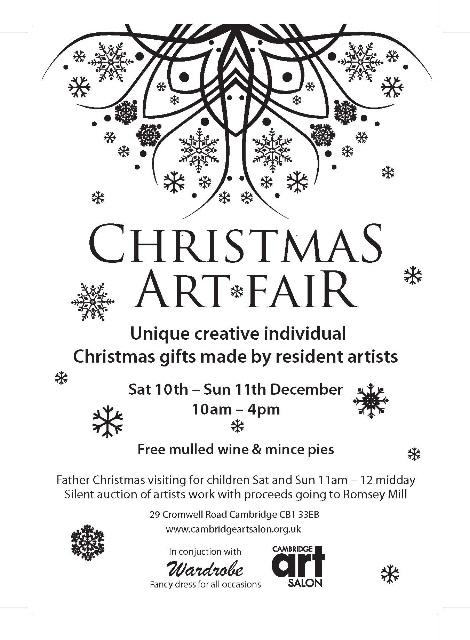 The Cambridge Art Salon is hosting Diana Probst’s show ‘Drawing Inspiration’ until Wednesday 16th November. She is showing original still life and portraiture and a selection of limited edition screen prints and monoprints.

Visit between 10 and 6 to meet the artist and see what she has done over the past year.